There currently is no direct express bus service that connects the West County with employment centers in west Berkeley, Emeryville, and Oakland. That journey now requires most transit users to make a “three-seat trip” using multiple transit providers. In addition, existing express bus service to San Francisco is at or nearing capacity and/or may not be serving emerging employment centers in San Francisco efficiently. Prior travel demand analysis has shown a need for a high-capacity transit option, like express bus service, to serve areas where BART doesn’t go. In addition, the 2017 West County High Capacity Transit Study found there was unmet transit need in the West County that could be served by express busses.

The Interstate-80 corridor is one of the most congested freeways in the Bay Area, and traffic jams often occur throughout the day and on weekends too. By offering expanded express bus service along the I-80 corridor, WCCTAC hopes to reduce commute times, improve air quality, and increase transit ridership and quality of life for commuters. To meet these goals, the study:

In addition to gathering feedback online, in-person outreach is an important part of the West Contra Costa Express Bus Study.  WCCTAC hosted pop-up events in West Contra Costa communities and held focus groups with major employers in west Berkeley, Emeryville, Oakland, and San Francisco. WCCTAC will continue to spread the word about the project through press releases, eblasts, and direct mailings. Help us spread the word about this exciting project. 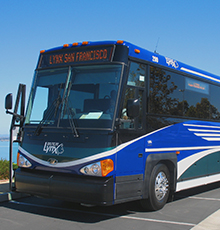